This java tutorial shows how to use the next(Pattern pattern) method of Scanner class of java.util package. This method returns the next token which the Scanner object determined using the Pattern object declared as method argument.

This method simply returns the next String token.

Requires Java 1.5 and up

– The IllegalStateException will be thrown if we invoke the next(Pattern pattern) method after the Scanner object is already closed.

The Scanner next(Pattern pattern) method is usually used when we are interested at specific token patterns like if we want to get integers only. This method really helpful as well in catching invalid tokens.

I will not go deeper into discussing regular expressions thus we have limited the discussion only in basic pattern.

The method next(Pattern pattern) is the same as calling the Scanner next(String pattern). Basically these two methods are the same in terms of functionality, the only difference is the object type of method argument. Maybe you are already wondering why do we have to go into trouble in using a Pattern object as method argument. The purpose of these overriding methods is for the purpose of differences in different system architecture. There are a lot of methods in java api that returns a Pattern object instead of Pattern object. In our own code we might also have our own methods that return Pattern object.

This java example source code demonstrates the use of next(Pattern pattern) method of Scanner class. 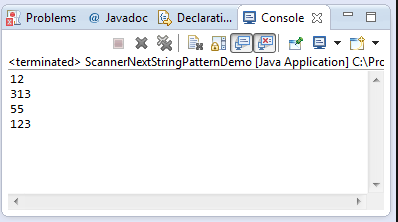 JavaTutorialHQ aims to to be The Ultimate Guide on Java with hundreds of examples from basic to advance Topics.

By continuing to use the site, you agree to the use of cookies. more information