This java tutorial shows how to use the replace() method of java.lang.String class. This method returns a String datatype which which is a result in replacing oldChar with the newChar as declared on the method arguments. This is basically changing a character to a new character which results to a new String object.

This method returns a String datatype which corresponds to a new String generated or derived in replacing the oldChar to newChar parameter.

You might be expecting that all ‘e’ on the str object will be replaced with character ‘t’. Do you think the code above will print “ttst”? You will be surprised that the output will be the original content of our string.

Then you might be wondering now, how to get the new String value. You can do this to print the new string object generated from replacing the oldChar to newChar.

This example source code demonstrates the use of replace() method of String class. Basically this source code just prints the resultant string after using the replace() method of String class. Always remember that the string would never change once it is instantiated thus the expression this.replace(oldChar,newChar) would not change the value of String. If we want the value out of the replace method, we should assign it to a new variable. We then print the full name using the classic System.out.println() method.

Running the replace() method example source code of java.lang.String class will give you the following output 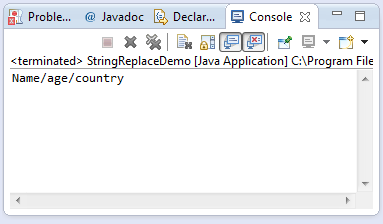